One of our most popular minor league teams finally gets upgraded to the 59Fifty silhouette! The Scranton Wilkes-Barre Yankees, who now go by the Rail Riders, were blessed with this primary logo which drew inspiration from their Major League affiliate. The beautifully colored logo shines with A’s Gold and Scarlet, evoking some major nostalgic vibes. The rear logo in Navy and Scarlet looks even more beautiful in-hand. 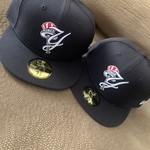