Once again, we’re marrying past and present. The colorway is derived from the Pirates current alternate look, while we’ve dug up a logo from the early 1900s. 1903 to be exact, with the logo worn during the 1903 World Series, where the Pirates faced off against the Boston Americans during the first ever World Series. This special patch is uniquely colored to match the rest of the hat, while rear logo continues the trend. Tonal New Era flag rounds out this very special custom fitted, which is sure to get any fan excited. 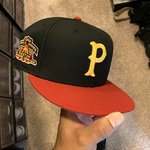