Stay with us on this one. In 1901, the Milwaukee Brewers were founded as a charter team of the American League. They would move after just season to St. Louis and renamed themselves the Browns for the next 52 years, after which they would move to Baltimore and play as a team called the Orioles. So what is this is, exactly? A Brewers fitted? St. Louis? Baltimore Orioles? Our answer is all three. Packed with so much history and tradition, this is a fitted with a long story of its own. Usually colored in Walnut wool, we opted to go with Maroon, a seldom seen variety of the Browns uniform. We thought it matched the Orangeade logo much better, and made it a ton easier to wear on an everyday basis. 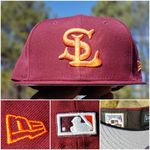